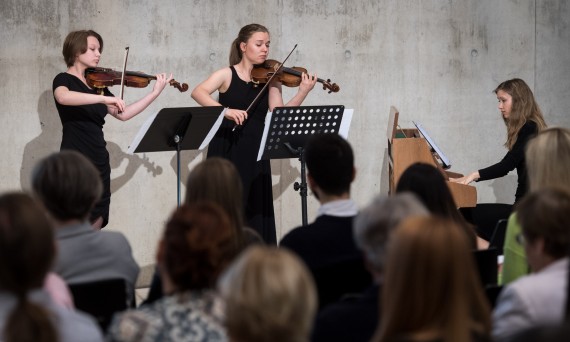 The Sonata no. I in G major by Domenico Gallo was long erroneously attributed to the more famous composer Giovanni Battista Pergolesi. Today, the sonata’s music is known not least due to Igor Stravinskij, who chose the festive “Moderato” to introduce the ballet Pulcinella (“d’après Giambattista Pergolesi”) and, consequently, the Italian Suite based on the ballet. For the occasion of the diploma ceremony, Gallo’s original sonata in three movements is performed.

The second intermezzo consists in two small pieces by Dmitrij Šostakovič that a fellow composer arranged for two violins and piano, but that were originally written for the cinema and the theater, respectively. The “Prelude” is played on the guitar in a rebels’ camp of pre-unitarian Italy in the Soviet movie The gadfly (1955); “Gavotte” was executed by a small ensemble to add to the ambiance of 19th century Paris in the play The human comedy by Pavel Suchotin (after Balzac), staged in Moscow in 1934.